Penthouse is a men’s magazine founded by Bob Guccione. It combines urban lifestyle articles and softcore pornographic pictorials that, in the 1990s, evolved into hardcore.

The Penthouse logo is a stylized key which incorporates both the Mars and Venus symbols in its design. The magazine’s centerfold models are known as Penthouse Pets and customarily wear a distinctive necklace inspired by this logo.[5]

At the height of his success, Guccione, who died in 2010, was considered one of the richest men in the United States. In 1982 he was listed in the Forbes 400 ranking of wealthiest people.[6] An April 2002 New York Times article reported Guccione as saying that Penthouse grossed $3.5 billion to $4 billion over the 30-year life of the company, with net income of almost half a billion dollars.[7]

The magazine was founded on humble beginnings. Due to Guccione’s lack of resources, he personally photographed most of the models for the magazine’s early issues.[9] Without professional training, Guccione applied his knowledge of painting to his photography, establishing the diffused, soft focus look that would become one of the trademarks of the magazine’s pictorials. Guccione would sometimes take several days to complete a shoot.

As the magazine grew more successful, Guccione openly embraced a life of luxury; his former mansion is said to be the largest private residence in Manhattan at 22,000 square feet (2,000 m2). However, in contrast to Hugh Hefner, who threw wild parties at his Playboy Mansions, life at Guccione’s mansion was remarkably sedate, even during the hedonistic 1970s.[9] He reportedly once had his bodyguards eject a local radio personality who had been hired as a DJ and jumped into the swimming pool naked.[10]

The magazine’s pictorials offered more sexually explicit content than was commonly seen in most openly sold men’s magazines of the era; it was the first to show female pubic hair, followed by full-frontal nudity and then the exposed vulva and anus.[9] Penthouse has also, over the years, featured a number of authorized and unauthorized photos of celebrities such as Madonna and Vanessa Williams. In both cases, the photos were taken earlier in their careers and sold to Penthouse only after Madonna and Williams became famous. In the late 1990s, the magazine began to show more “fetish” content such as urination, bondage and “facials“.[9]

View cart “Penthouse Magazine 1974 7409 September” has been added to your cart. 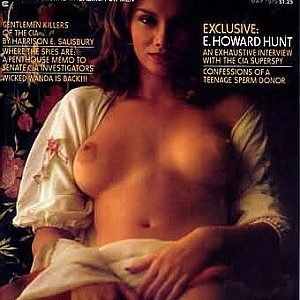