Fiesta magazine is a British adult magazine featuring softcore pornography, published by Galaxy Publications Limited.[1] It is a sister publication of Knave.[2]

Launched in 1966, Fiesta quickly became Britain’s top-selling adult magazine. Dubbed “the magazine for men which women love to read”, the monthly magazine’s readers were responsible, in the early 1970s, for creating a feature that has been adopted in magazines worldwide: Readers’ Wives.[3] Central to this theme is the monthly “Readers’ Wives Striptease” section, which shows a set of photos of a supposed wife or girlfriend of a reader being photographed by Fiesta undressing (often, but not always out of everyday clothing) to full nudity.[4] The Readers’ Wives section was the subject of a song by John Cooper Clarke on his album Disguise in Love.

Mary Millington modelled for the magazine in 1974, prior to her exclusive signing to work for David Sullivan‘s magazines.[5]

Nicholas Whittaker, journalist and author of Platform Souls, Blue Period and Sweet Talk, worked for the company from 1980 to 1982, when he left to go and work for Paul Raymond Publications, where he played a major role in establishing the new Razzle magazine. His experiences at Fiesta and Razzle are the subject of his book Blue Period.[7]

View cart “FIESTA Magazine Vol 10 No 10” has been added to your cart. 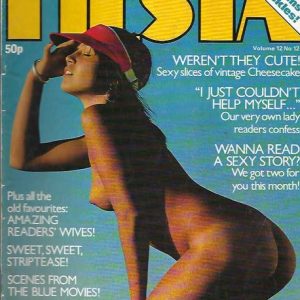