Arthur Boyd is Australia’s most famous and prolifice 20th century artist, and with 25,000 works of art in numerous collections, his paintings, graphics and ceramics are an established and substantial part of Australia’s art legacy. Along with his contemporaries Sidney Nolen and Russell Drysdale, Boyd helped to bring Australian art to the attention of the outside world. In 1993, he gave his favourite workplace, Bundanon, on the Shoalhaven River, in New South Wales, to the nation, where the Australian government plans to create a major art centre.” pp. 128 illusts #0720 (Small ex libris stamp on prelim) 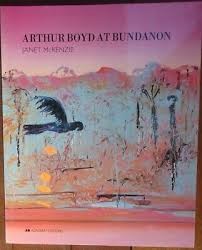