The 19th Battalion was a formation of the New Zealand Military Forces which served, initially as an infantry battalion and then as an armoured regiment, during the Second World War as part of the 2nd New Zealand Division.

The 19th Battalion was formed in New Zealand in 1939 under the command of Lieutenant Colonel J. S. Varnham. After a period of training it embarked for the Middle East and then onto Greece in 1941 as part of the 2nd New Zealand Division. It participated in the Battles of Greece and later in Crete. Evacuated from Crete, it then fought in the North African Campaign and suffered heavy losses during Operation Crusader. Brought back up to strength, the battalion participated in the breakout of the 2nd New Zealand Division from Minqar Qaim in June 1942, where it had been encircled by the 21st Panzer Division. The following month, the battalion suffered heavy casualties during the First Battle of El Alamein.

In October 1942, the battalion was converted to an armoured unit and designated 19th Armoured Regiment. To replace men lost at El Alamein, personnel were drawn from a tank brigade being formed in New Zealand. The regiment spent a year in Egypt training with Sherman tanks, before embarking for Italy in October 1943 to join the Eighth Army. It participated in the Italian Campaign, fighting in actions at Orsogna and later at Cassino. The regiment finished the war in Trieste and remained there for several weeks until the large numbers of Yugoslav partisans also present in the city withdrew. Not required for service in the Pacific theatre of operations, the regiment was disestablished in late 1945. 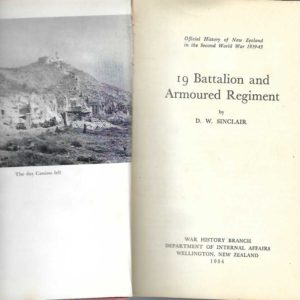