Anzacs And Israel: A Significant Connection

Napoleon’s invasion of the Eastern Mediterranean in 1798 provoked a keen interest among the European empires for involvement in that strategic region. Thereafter Britain was especially concerned with that regions’s influence on the link to her Eastern Empire of India, Australia, New Zealand, Ceylon, Hong Kong, Singapore and Malaya. Simultaneously many people believed that the time was drawing near for the restoration of Israel after 1800 years of national dispersion. Another major event in the Eastern Mediterranean was the Gallipoli campaign of 1915. Concerning this campaign Winston Churchill wrote: From the uttermost ends of the earth ships and soldiers are approaching or gathering in the Eastern Mediterranean in fulfilment of a destiny as yet not understood by mortal man … the arrival of the Anzacs in Egypt created the nucleus of the Army needed to attack the heart of the Turkish Empire.” This book describes the significant contribution of the Anzacs in the establishment of modern Israel as a result of the Gallipoli campaign and other critically-important battles fought in the Eastern Mediterranean during both World Wars 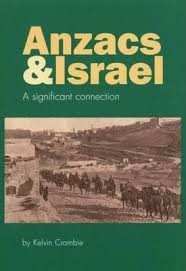 Anzacs And Israel: A Significant Connection