This, the first ot two volumes dealing with political and social events in Australia during the 1939–45 war, carries the story down to the entry of Japan into the war.

Early chapters review at length the development of Australian ideas on defence and foreign policy in the period between the war 1914–18 and 1939 and recount the measures taken in Australia in preparation for war. The stage is set for a study of wartime political events by a close examination of the ideas and attitudes in the various political groups in Australia.

The various factors that shaped decisions regarding Australian expeditionary forces and the building up of Australian war industry and the circumstances of political strife in which those decisions were made are recounted. Interwoven with this narrative is an account of the various social changes that were taking place and the way in which popular opinion was affected by the changing fortunes of war, so that the volume tells not only of the Government, but also of the people of Australia.

The machinery of government is examined with constructive comment in a chapter on “Wartime Administration”, which will be of outstanding interest to specialists in this field. 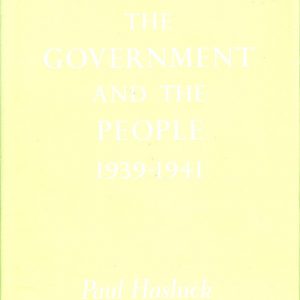