Gallipoli Diaries : The Anzac’s Own Story Day by Day

Jonathan King’s highly regarded book on the Gallipoli story is told in the words of the ordinary soldier fighting in the trenches. Day by day, starting with the landing on 25 April 1915 and continuing to the last day on 20 December 1915, the world of the Gallipoli soldier is starkly revealed. Jonathan King has gathered together an unequalled series of extracts from letters and diaries written by hundreds of soldiers who fought in the trenches at Gallipoli. Through quoting from the men’s own words, we share in the soldier’s experience. The descriptions of life in those miserable trenches runs the full gauntlet of the soldiers’ experiences, from the utterly mundane, such as describing the weather, to the most poignant, like a young soldier devastated by accidentally shooting his mate. There are descriptions of men scrounging for bully beef, breaking their teeth on Anzac biscuits, going mad with fleabites, catching endless armies of lice, burying their mates every day, swapping cigarettes with enemy Turks when their officers weren’t looking, sheltering from rain, shivering in snow, warding off frostbite, thinking of death when their turn comes up to ‘go over the top’, scribbling a last letter home, praying for deliverance, or shooting themselves in a foot to get out of the hellhole. Generals, historians and war scholars have told their versions, but it is only when you read the words of men in the frontline that you know what it was really like. pp. 413 illusts #0219D 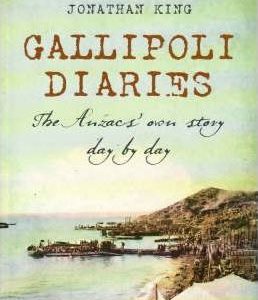 Gallipoli Diaries : The Anzac’s Own Story Day by Day