Home › Shop › AUSTRALIANA › An Indelible Stain?: The Question of Genocide in Australia’s History

View cart “Captain Starlight’s Apprentice (SIGNED BY AUTHOR)” has been added to your cart.

An Indelible Stain?: The Question of Genocide in Australia’s History

Was the killing of Aboriginal people by white settlers genocide? Were government policies designed to eliminate the Aboriginal races?In 1830 the Secretary of State for the Colonies, Sir George Murray, wrote: ‘the adoption of any line of conduct, having for its avowed, or for its secret object, the extinction of a Native race, could not fail to leave an indelible stain upon the character of the British Government.’Has our history left an ‘indelible stain’ upon the character of Australian governments – imperial, colonial, federal, State – as Sir George Murray feared so long ago?In this important new book, Henry Reynolds examines the controversial question of genocide, aware that there can be no final answer. An Indelible Stain? will be a valuable contribution to the national debate on one of the most vital issues facing Australia in the twenty-first century. pp. 209 First Edition #0920 (Light age tanning) ISBN 10: 0670912204ISBN 13: 9780670912209 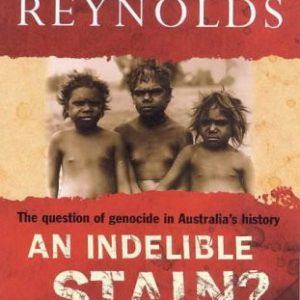 An Indelible Stain?: The Question of Genocide in Australia’s History