Explorer, pioneer aviator, war photographer, naturalist, meteorologist, author, student of the paranormal, and secret agent; loyal lieutenant to Shackleton, Bean and Hearst; the last man from the West to meet with Lenin … Sir Hubert Wilkins lived many lives – all of them exciting and fantastic. He shot the world’s first movie footage from an aircraft (while strapped to its fuselage); and was the first to fly over both polar ice caps. He was the only member of the media ever to win medals for gallantry (during World War I); the first man to attempt to take a submarine under the North Pole; a spy for the British in Soviet Russia and the Americans in the Far East; and an enlightened friend to Aboriginal people in outback Australia. Yet this South Australian farmboy is barely acknowledged here in his homeland. Author Malcolm Andrews has breathed life into the exploits of this remarkable yet humble adventurer, creating a gripping tale that resoundingly answers the question: ‘Hubert who?’ So set your compass north and it’s chocks away – for the amazing true story of one of history’s greatest unsung heroes… pp. 289 illusts #0218/0619/0221 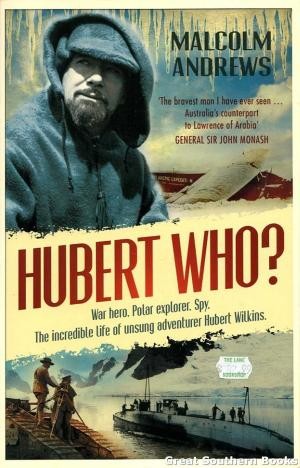