Passionate Bibliophile, The : The Story of Walter Stone

The Passionate Bibliophile’ is the story of Walter Stone, Australian Bookman Extraordinaire. Book collector, editor, publisher and printer, Walter Stone had a long and passionate affair with all things literary and, in particular, with what he affectionately called “Auslit”. In this absorbing biography of her late husband, Jean Stone conjures up vividly his life and times, at the same time illuminating many dark corners of Australian literary history. The son of a bookmaker and a politically active mother, Walter Stone was born in 1910 in Orange, NSW, moving to Sydney in his teens. As a teenager he had a compulsive habit of visiting the city bookshops, walking so as to save money for the books that became the foundation of the Australian collection he was to acquire over 50 years. During the Depression Era when he was also actively involved with Jack Lang and the Labor Army, and through the following decades, as he became more deeply involved with book collectors, writers and their various associations, he never ceased to promote Australian writers and to fire others with his enthusiasm. Jean Stone provides fascinating glimpses of the literary personalities that figured in Walter’s life. She quotes extensively from his lively correspondence with fellow book-collector Gavin Semple, and describes his activities in the long struggle to establish proper recognition of Australian literature in a nation still prone to the cultural cringe. This book is a valuable addition to any book lover’s library. (Slight edge-wear to jacket.) 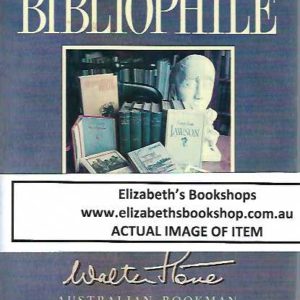 Passionate Bibliophile, The : The Story of Walter Stone