In 1978 Robyn Davidson visited, quite by chance, a camel fair in Pushkar, Rajasthan. There she found herself amidst the pastoral nomads of north-west India, thousands of whom had congregated to buy and sell their animals. She was on her way to England to write her celebrated book, Tracks, about traversing the deserts of Australia through tribal Aboriginal land – a journey that left her obsessed with nomadism, a way of life that has been with us since our origins but was about to disappear. As soon as she saw the Rajasthani nomads, she wanted to accompany them on a year’s migratory cycle through the Thar Desert. The wish took the form of an image – sand-dunes, sunsets, men in red turbans and women in pink muslin decorated with silver – a romantic ideal. A decade later she was given an opportunity to live out that wish. But it was to take years, and a series of false starts, before she was able to join a dang on migration.
For the Rabari, who had always survived harsh conditions, life had become increasingly grim. The loss of grazing lands, new political boundaries, and the constant threat of thefts, murders and arrests meant that migration had become a treacherous business.
She was determined to live as they lived, to ‘enter the frame’. Which meant that she too slept among five thousand sheep, drank Guinea-worm-infested water, survived on goats’ milk and roti. But it was not so much the physical discomforts which exhausted her as the isolation imposed by the lack of a common language. Yet solitude was denied her too and crowds gathered wherever she went. It became a journey of extremity and sickness and frightening rages. Sometimes the countryside was beguiling, sometimes brutalized, but always a place in which desperate people fought over few remaining resources. Any lingering romanticism concerning Indian rural life was destroyed. But a profound respect and affection for her hosts was forged. She could return to comfort and security; for the nomads, it was real life.
In this brave and moving journey, Robyn Davidson travels the last pathways of the Rabari, the ‘keepers of the way’, and in so doing explores, with ruthless honesty, her own desert places. She scours away her original vision and finds beneath both tragedy and human greatness. pp. 279 maps illusts First Edition #0720 Author of Tracks: A Woman’s Solo Trek across 1700 Miles of Australian Outback 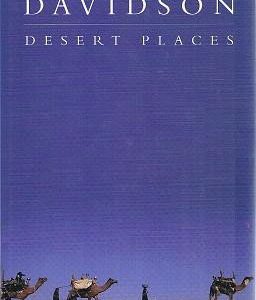