Voyage of HMS Herald, The : To Australia and the South-West Pacific 1852-1861 Under the Command of Captain Henry Mangles Denham

This is the authoritative account of one of the longest and most important surveying cruises of the golden age of world hydrography.

This voyage of HMS Herald, under the command of Henry Mangles Denham, encompassed much of the South-west Pacific and substantial parts of the Australian coast. From 1852 to 1861, the Herald surveyed and charted known land masses and suspected hazards, thereby establishing safe routes for shipping. That some of these charts are still in use is testimony to the accuracy and skill of those who created them Commander David makes extensive use of the journals of Denham and his officers to describe mid-nineteenth-century techniques of surveying and charting, often undertaken in hazardous conditions. His book also provides an unusual and often entertaining view of the difficulties experienced in field work. The collection of natural history specimens, another part of the Herald’s task, resulted in significant additions to British collections. Botanical and ornithological discoveries are described using current nomenclature, and the habits of some species now threatened or extinct are… 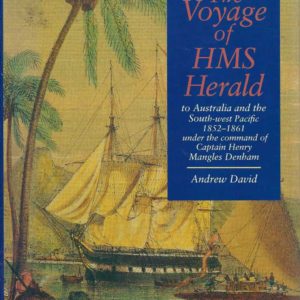 Voyage of HMS Herald, The : To Australia and the South-West Pacific 1852-1861 Under the Command of Captain Henry Mangles Denham