View cart “Tracing Tracks Through Newcastle” has been added to your cart.

Catalogues the diversity of the vascular flora occurring in Western Australia. The State contains about 3% of the world’s flora with several areas of special interest. Nearly 80% of the taxa in the south west is endemic. Lists every native and naturalised alien plant known to occur in the State by family, genus and species, accompanied by a brief description of its habit, height, flowering time and colour, habitat and distribution. Subspecies and varieties are included, as are new entities scientifically recognised but yet to be formally described. Describes 11,922 vascular plant taxa, as recorded in the information systems of the WA Herbarium in January 2000. Wildflower Society of Western Australia, Western Australian Herbarium, Botanic Gardens & Parks Authority (W.A.) The definitive reference work. Colour map and plates. pp. 652 #200815/0318/0520/1020/0921 Out of print SCARCE 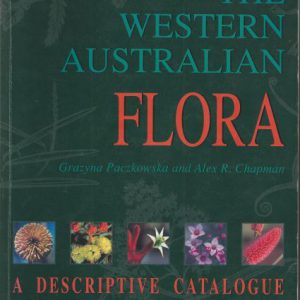