Engaging and enlightening, this guide explores African music’s forms, musicians, instruments, and place in the life of the people. & A classified by country, theme, group, and instrument is also included.
pp.184 illustrated #260422
Francis Bebey, 1929 – 2001 Francis Bebey was born in Douala, Cameroon in 1929. He attended schools in the United States and France and decided to settle in France when he was through with his education. His most famous work is “African Music: A People’s Art.” Bebey was employed at Unesco where he eventually became the head of the agency’s music department. Bebey retired in 1974 to spend more time on writing music and compositions. He wrote music for many instruments, from the guitar to the pygmy flute and recorded some of those compositions. He also liked to blend African music with various music styles from around the world and was considered an authority on African traditional music. In 1975, Bebey published “African Music: A People’s Art,” which surveyed Africa’s musical heritage and included a discography and a collection of photographs of famous African musicians. 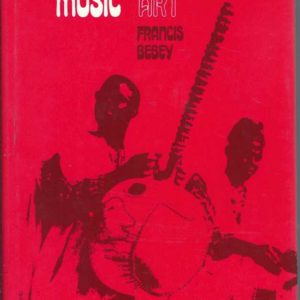