From the first convict runaways to the spectacular showdown that ended Ned Kelly’s career, Evan McHugh delivers true tales of daring exploits and a cast of roguish characters who blazed their place into Australian history.

These are incredible stories of the men – and women – who achieved fame not just by what they did, but by the way they did it, many of them lifting themselves from downtrodden underdogs to self-made heroes. There are heroic figures like Cash and Company, the prince of bushrangers Matthew Brady, Bold Jack Donohue, brave Ben Hall, Captain Thunderbolt and of course, Ned Kelly. But there are also villains like Pearce the Cannibal, Jeffries the Monster and ‘Mad Dog’ Morgan.

Bushrangers is as fast paced as a stolen thoroughbred and as arresting as a squad of troopers. Through extensive first-hand accounts and gripping detail about Australia’s lawless past, bestselling author Evan McHugh brings a fresh perspective to a turbulent era of crime, defiance and emerging Australia identity.
316 p., [16] p. of plates : ill. (some col.), maps, ports. ; 24 cm. #0821 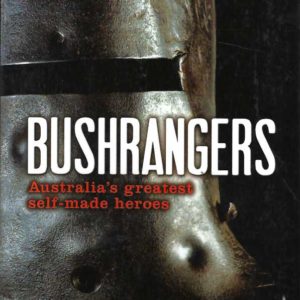