Air Marshal Sir Valston Eldridge (Val) Hancock, KBE, CB, DFC (Born Perth, WA 31 May 1907 – 29 September 1998) was a senior commander in the Royal Australian Air Force (RAAF). He served as Chief of the Air Staff from 1961 to 1965. A graduate of the Royal Military College, Duntroon, Hancock transferred to the RAAF in 1929 and qualified as a pilot. His administrative training at Duntroon saw him primarily occupy staff posts, including Deputy Director of Operations and Intelligence at RAAF Headquarters from 1931 to 1935, and Director of Works and Buildings from 1937 to 1939. During the early years of World War II, he commanded No. 1 Bombing and Gunnery School, and held senior planning and administrative positions. He eventually saw combat in the Aitape–Wewak campaign of the Pacific War during 1945. Flying Bristol Beaufort light bombers, he led first No. 100 Squadron, and later No. 71 Wing. His actions earned him the Distinguished Flying Cross. pp. 247 First Edition Illustrated #0816/0518/0521 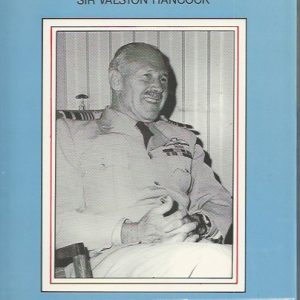