From Snow To Jungle: A History of the 2/3rd Australian Machine Gun Battalion

The 2/3rd Machine Gun Battalion was formed in June 1940 as part of the 7th Division and served in Egypt, Syria, the Netherlands East Indies and New Guinea during World War II. Under the command of Lieutenant Colonel Arthur Blackburn when it was raised, the battalion was primarily a South Australian unit, although it had sub-units formed in Victoria, Tasmania and Western Australia. After completing training in Australia, in April 1941 the battalion embarked for the Middle East. In June/July 1941 it saw action against Vichy French forces during the Syria–Lebanon campaign, during which time the battalion was heavily involved in supporting various elements of the 7th Division.

Following Japan’s entry into the war, the decision was made to transfer a large number of Australian troops from the Middle East to the Pacific region. In early 1942, as the Japanese advanced through the Netherlands East Indies, the majority of the battalion was captured during the Battle of Java. A small number of the battalion’s personnel returned to Australia and it was subsequently re-raised in mid-1942. It was later attached to the 6th Division as a corps unit and served in Papua New Guinea during the Aitape–Wewak campaign in 1944–1945. The battalion was disbanded in January 1946. 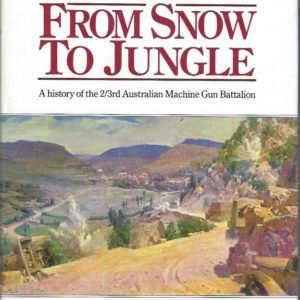 From Snow To Jungle: A History of the 2/3rd Australian Machine Gun Battalion