Home › Shop › TRUE CRIME AUSTRALIA › Moran v Moran: A Family, A Suicide and the Court Case That Gripped a Nation

Moran v Moran: A Family, A Suicide and the Court Case That Gripped a Nation

Sensational courtroom drama centering on a high profile family, by highly acclaimed Walkley award-winning journalist, Murray Waldren. the civil trial of Moran v. Moran was a real-life soap opera, which held the public in its thrall for eight weeks in the summer of 2000. the plaintiff in the Supreme Court was Kristina Moran who sat close to tears as she gave, and listened to, evidence about the family into which she married in 1990. In 1995, with her marriage in tatters, her husband Brendan committed suicide. Kristina then sued parents-in-law Doug and Greta Moran, and brother-in-law Peter, claiming their physical and verbal abuse of Brendan led to his suicide. She sought compensation for herself and her two young sons. the trial revealed far blacker aspects about this extraordinary family than anyone expected and the media and public became greedy for more of the Morans. Eventually a settlement was reached but not before many shocking family conflicts had been laid bare. #0521 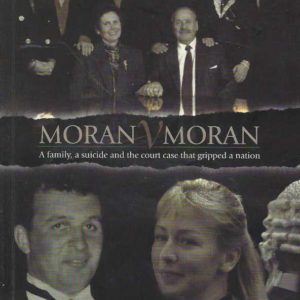 Moran v Moran: A Family, A Suicide and the Court Case That Gripped a Nation