No Need for Heroes : The Original Tunnel Rats

The story of 3 Field Troop, Royal Australian Engineers (RAE) during their tour of duty in South Vietnam.
Three Field Troop were part of the first major commitment to Vietnam and built the Australian Task forces base.
Known as ‘The Tunnel Rats’, they were also the discovers a large Viet Cong tunnel complex and followed the enemy down into the tunnels.
The author was awarded the Military Cross (MC) for leadership and bravery leading Australian soldiers into the Viet Cong tunnels.
This is the story of the Australians who discovered the Viet Cong’s secret tunnels. A group of Australian Army engineers were among the first Australians to fight in Vietnam. They faced death every day defusing Viet Cong booby traps, then they partied all night in a casino they’d built in secret. They led hundreds of American troops to safety, but fought US military police to a standstill in the bars of South Vietnam. They built the Australian Task Force’s base, then sabotaged a headquarters conference, booby-trapped showers and blew up a generator rather than kowtow to newly arrived officers. The men of Three Field Troop discovered a huge Viet Cong tunnel complex, and were the first Allied troops to follow the enemy down into their underground city. They were the original “tunnel rats”, and this is their story.
266 pages : illustrations, portraits ; 22 cm #070522 First Edition. 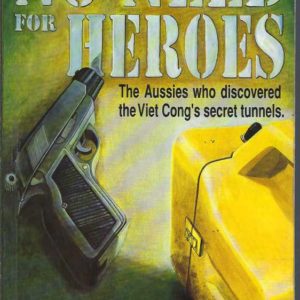 No Need for Heroes : The Original Tunnel Rats