Women to the Front: The Extraordinary Australian Women Doctors of the Great War

At the outbreak of World War I, 129 women were registered as medical practitioners in Australia, and many of them were eager to contribute their skills and expertise to the war effort. For the military establishment, however, the notion of women doctors serving on the battlefield was unthinkable. Undaunted, at least twenty-four Australian women doctors ignored official military policy and headed to the frontlines. This book explores the stories of the Australian women who served as surgeons, pathologists, anaesthetists and medical officers between 1914 and 1919. Despite saving hundreds of lives, their experiences are almost totally absent from official military records, both in Australia and Great Britain, and their achievements have remained invisible for over a century. Until now.Heather Sheard and Ruth Lee have compiled a fascinating and meticulously researched account of the Great War, seen through the eyes of these women and their essential work. From the Eastern to the Western Fronts, to Malta, and to London, we bear witness to the terrible conditions, the horrific injuries, the constant danger, and above all, the skill and courage displayed by this group of remarkable Australians. Women to the Front is a war story unlike any other.
xiii, 305 pages, 16 unnumbered pages of plates : illustrations (some colour), portraits ; 24cm #0721
Australia. Army. Medical Corps — History. | Australia. Army — Women — Biography. | World War 1914-1918 — Women — Australia. | Medical care — Women — Australia. | Australian 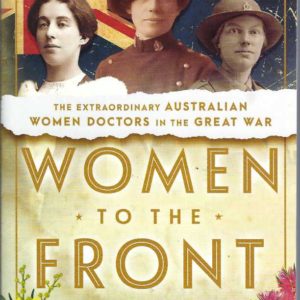 Women to the Front: The Extraordinary Australian Women Doctors of the Great War