Home › Shop › SOLD! Currently OUT OF STOCK › TO WAR WITHOUT A GUN

TO WAR WITHOUT A GUN

The author, one of only six medical lieutenant-colonels to be captured and sent to Germany, received two service awards from the French government for his work in prisoner of war camps. He also received the OBE for his services with the 2/7th Australian Field Ambulance in the Western Desert, Greece and Crete. 402 p. : ill., map, ports. ; 25 cm. #171215R/260122

First Edition.
Australian prisoners of war. Medical aspects. Germany, 1941-1945. Personal observations | World War, 1939-1945 — Prisoners and prisons, German. | World War, 1939-1945 — Personal narratives, Australian. | World War, 1939-1945 — Health aspects.
Born in South Perth in 1900, the son of Ernest Albert and Ellen Grace (nee Hagenauer) LeSouef, Leslie was educated at Perth Modern School and the University of Western Australia,then Melbourne University.
During the Second World War, Le Souef served overseas, attaining the rank of Major and Lt.Col. in command of the Australian Army Medical Corps. He raised and trained the 2/7
Australian Field Ambulance Unit in 1939. He was captured by German soldiers and made aprisoner-of-war on the Island of Crete.
For his work whilst a prisoner-of-war, he was awarded the Medaiile d’Honneur du Service deSante Militaire and the Medaiile de la Reconnaisance Francaise. 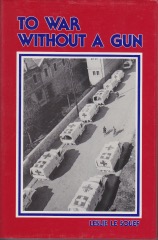 TO WAR WITHOUT A GUN