Home › Shop › SOLD! Currently OUT OF STOCK › Writing from the Fringe: A Study of Modern Aboriginal Literature

Writing from the Fringe: A Study of Modern Aboriginal Literature

Author is part-Aboriginal Australian novelist, born in Beverley, Western Australia, and brought up in an orphanage. He spent several years from 1965 in India, part of the time as a Buddhist monk. Wild Cat Falling (1965), the first published novel by an Aboriginal writer, presented a stark portrait of the problems for Aboriginal people in modern Australian society. The novel Long Live Sandawara (1979) followed the failed attempts of a part-Aboriginal youth to organize Aboriginal resistance in Perth. Doctor Wooreddy’s Prescription for Enduring the Ending of the World (1983) explores the tragic history of race relations in Tasmania. Doin’ Wildcat: A Novel Koori Script (1988) employed skilful interweaving of original text, film adaptation, and authorial commentary. Master of the Ghost Dreaming (1991) concerns two Cockney missionaries and their relationship with an Aborigine who is trying to recreate the spirit of his tribe. The Kwinkan (1993) reveals the cancer of political corruption and suspicion in white society via a paranoiac white narrator who believes an Aboriginal conspiracy has sabotaged his career. Johnson’s verse collections include The Song Circle of Jacky and Selected Poems (1986), Dulwurra: The Black Bittern. A Poem Cycle (1988), and The Garden of Gethsemane (1991); the sequence showed the effectiveness of traditional concepts and forms in embracing a search for spirit and heritage that is international in scope. A critical work, Writing from the Fringe: A Study of Modern Aboriginal Literature, was published in 1990. Aboriginal Mythology (1994) is a cultural history. pp.207 #1218X 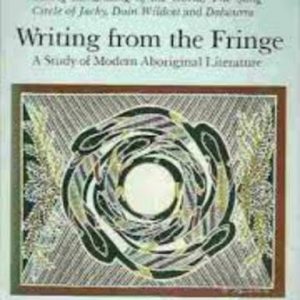 Writing from the Fringe: A Study of Modern Aboriginal Literature