SCARCE MINT COPY Catalogue of an exhibition held at the National Gallery of Victoria from 11th August to 15th October 2006. 142 p. : col. ill. ; 28 cm. #0921
With his 46 “Alice in Wonderland” paintings, Charles Blackman is being introduced to American audiences. In these surrealistic “Alice” images, Blackman, one of Australia’s most significant artists, has blended iconic motifs from Carroll’s fantastic journey into the imagination with the duality of his own life. The catalyst for the series had been Blackman’s hearing a recording produced for the blind of Carroll’s classic which he had never read. The story of Alice moving through a tableau of constantly frustrating situations paralleled his wife’s worsening experiences as her eyesight progressively deteriorated. Blackman produced the pictures in 12 months. Artists paint in response to life experiences all the time, but Blackman’s pictures are intimate in their depiction of Alice (his wife) and himself (as the rabbit), and they manage to be both poignantly personal and universal at the same time. The Australian public never lost their love affair for the series, and the pieces were gathered together from private Australian and overseas collections for a 50th anniversary show that became immensely popular at the National Gallery of Victoria during 2006. Thirty years ago a critic had written that these images were “disposed with an astonishing intuitive guileless grace … and deserved a prolonged analysis and a book devoted to them.” This book does that. It contains all the pictures in the series that were in the exhibition and has the additional fillip of quotations from Alice’s Adventures in Wonderland and Through the Looking Glass placed on each page opposite the paintings.
Blackman, Charles, 1928-2018 — Exhibitions. | Alice (Fictitious character from Carroll) — In art.
Moore, Felicity St. John, 1933- | Carroll, Lewis, 1832-1898. Alice’s adventures in Wonderland | National Gallery of Victoria. Council of Trustees | National Gallery of Victoria 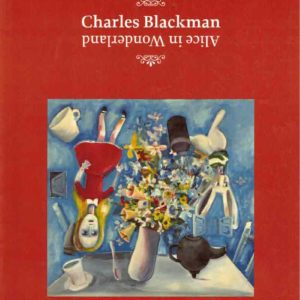