No Pleasure Cruise: The story of the Royal Australian Navy

Description Table of Contents Product Details
A comprehensive, easy-to-read history of the Royal Australian Navy from its inception in 1901 to the present day.

In 1901 Australia’s fledgling Federal Government assumed the responsibility for the new nation’s defence. Their first task was to take the aged and obsolete remnants of the colonies’ navies and create a national navy to defend our island’s coastal waters and overseas trade routes.

For the first 40 years the Royal Australian Navy (RAN) was designed to serve alongside the Royal Navy, and resembled it in everything but scale. After the Second World War the RAN developed along US lines but, despite these overseas ties, the RAN has developed its own proud character and tradition and has entered the twenty-first century as a confident and independent force in its own right.

In No Pleasure Cruise, Australia’s best-known naval historian, Dr Tom Frame, charts the RAN’s emergence as one of the world’s strongest and most respected navies, and its evolving relationship with the Australian public, press and parliament. xiii, 336 p. : ill. ; 23 cm. #0521 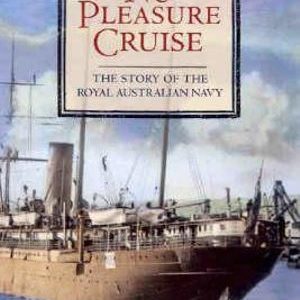 No Pleasure Cruise: The story of the Royal Australian Navy