View cart “Tracing Tracks Through Newcastle” has been added to your cart.

In May 1949, renowned Australian painter William Dobell (1899 – 1970), in an endeavour to escape publicity after his 1948 Archibald Prize win, left Australia with his friend, writer Colin Simpson, in the company of philanthropist and trustee of Taronga Park Zoo, Sir Edward Hallstrom. One of 27 guests flown by Hallstrom from Australia to Port Moresby and on to his experimental sheep station and bird of paradise sanctuary at Nondugl in the central highlands of New Guinea, it was the first time Dobell had ever stepped inside an aircraft and despite initial nerves, the artist was captivated by everything he saw. For the following three months he drew and painted watercolours of the landscape, village life and the highlanders themselves, adorned with magnificent bird of paradise plumes, intricately constructed jewellery and elaborately painted faces and bodies.

Returning to Sydney, Dobell was haunted by his experience in the highlands and in April 1950, sponsored by Qantas Empire Airlines, returned to the area, this time extending his travels to include an extended period in Port Moresby and a boat trip on the Sepik River. On this second expedition, Dobell not only took his sketchbooks but a camera, and recorded on black-and-white film daily life in Mount Hagen and Nondugl, as well as rare early images of the Upper Sepik region. These photographs and sketches formed the basis of many paintings he was to produce in the following two decades.

“The natives up there in the Wahgi Valley are immensely beautiful, physically superb, and with a sense of human dignity which sophisticated civilisation seems to have forgotten…Combine this with marvellous light and colour, and primitive vigour, and you have a completely satisfying artistic experience. This attitude of simple dignity is what I’ll try to get. Whether I succeed or not is another matter”. WIILLIAM DOBELL, 1949

The exhibition, conceived by guest curator Natalie Wilson, Curator of Australian & Pacific Art at the Art Gallery of New South Wales, will be the first exhibition to focus solely on this aspect of one of Australia’s most recognised and well-loved painters, renowned for his sensitive portraits of Australian cultural icons, as well as internationally respected dignitaries and political figures.

Through an extraordinary group of around 100 drawings, paintings, watercolours, and photographs from private and public collections – including the Art Gallery of New South Wales, National Gallery of Australia, Newcastle Art Gallery and Lake Macquarie Art Gallery – the exhibition will explore the artist’s engagement with the landscapes and people he encountered on his journeys. The exhibition included New Guinean works that directly relate to Dobell’s images of life in the Territory, most significantly, a magnificent flute stopper from the Lower Sepik owned by Dobell and now in a private collection. 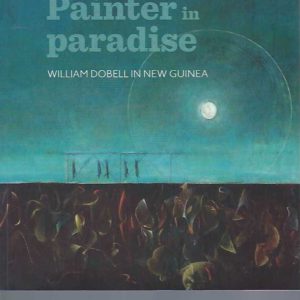