Vietnam, The Australian War is a non-fiction book (ISBN 9780732282370) written by Australian author and historian Paul Ham. Published in 2007, this book is a comprehensive history of the First and Second Indochinese wars, written from a predominantly Australian point of view, namely, the First Indochina War and the Vietnam War. It sets the Australian involvement in the war in Vietnam in the context of the American and Vietnamese experiences. The book examines the impact of Australian and American relations on military decisions, the relationship between the two countries’ governments, and the aftermath of the war.] The author draws on voluminous sources, many of them recently declassified, and recounts the history of Indochina as far back as about 3,000 years.

The book has been used in Australian state school curriculums and in Australian government affairs. Vietnam: The Australian War won the 2008 NSW Premier’s Prize for Australian History and was shortlisted for the Walkley Award for Non-Fiction. The book was used as a source for the Screen Australia 2011 Documentary All The Way. “The book is the soldiers’ story of deployment in an ideological war.”

The book was first published November 2007 by the HarperCollins Australian publishing house. Funding from the LBJ Library was provided to the author as a research grant for the book’s American material. The book draws heavily on hundreds of interviews with Australian veteran servicemen that were conducted in person, by post, telephone and email by the author and the Australian Defence Force. The latter had been kept secret since they were taken almost thirty years previously.] Ham also interviewed North Vietnamese veterans and former Vietcong soldiers, during several visits to Vietnam; as well as relying on interviews with Viet Cong prisoners taken by Australian intelligence agents during the conflict. Ham has said the book acts as ‘narrative history’ because it looks into the repercussions of war and “has the story of individuals; human beings subjected to shocking circumstances”. 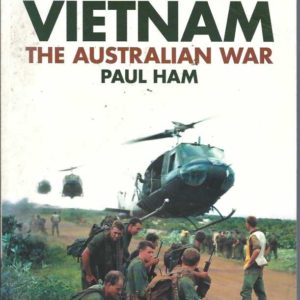