11 colour illustrations. 20 monochrome illustrations. Notes. Chronology. List of illustrations. Bilingual German / English texts. Study of the early works 1966-1970 of American conceptual artist, Bruce Nauman. Bruce Nauman was one of the most prominent, influential, and versatile American artists to emerge in the 1960s. Although his work is not easily defined by its materials, styles, or themes, sculpture is central to it, and it is characteristic of Post-Minimalism in the way it blends ideas from Conceptualism, Minimalism, performance art, and video art. The revival of interest in Marcel Duchamp in the 1960s also clearly influenced Nauman in various ways, from encouraging his love of wordplay to infusing his work with a satirical and sometimes absurdist tone. Despite the impact of Dada, however, he has continued to view his art less as a playful or creative enterprise than as a serious research endeavor, one he likes to carry out in seclusion from the art world, one that is shaped by his interests in ethics and politics.Key IdeasSome of Nauman’s earliest work was shaped by ideas that arose in the wake of Minimalism in the late 1960s. In particular, the way he treated the body – often his own, shown on video completing repetitive tasks – and the way he related the body to surrounding objects show the impact of Minimalism’s new ideas about the relationship between the viewer and the sculptural object. His occasional interest in abstraction and sculptural concerns such as gravity also betray the style’s influence. But Nauman, shunned the slick production values of Minimalism and has often showed a preference for a cruder manner of presentation.Ludwig Wittgenstein’s ideas about language have been an important influence on his work, shaping his interest in the way words succeed or fail in referring to objects in the world. The philosopher’s outlook has also no doubt influenced the tone of some of Nauman’s work, which sometimes has comic, absurdist touches, employing jokes and word play, and yet also touches on obsessive behavior and frustration.Much of Nauman’s work reflects the disappearance of the old modernist belief in the ability of the artist to express his ideas clearly and powerfully. Art, for him, is a haphazard system of codes and signs, just like any other form of communication. Aside from informing his use of words, it has also encouraged him to use “readymade” objects – objects that, unlike paintings or traditional sculptures, already carry meanings and associations from their use in the world – and to make casts of objects ranging from the space underneath chairs to human body parts. 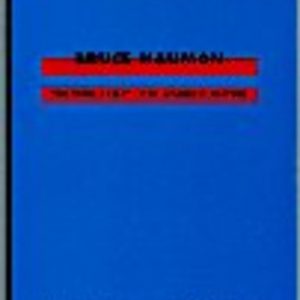