Bob Thompson (1937-1966) was a figurative expressionist painter active in literary, musical, and artistic circles in New York and Europe from the late 1950s until his death in 1966. In the first book devoted solely to Thompson, the life and work of this pivotal figure in modern American art history and African American culture receive the attention they deserve.
Judith Wilson situates Bob Thompson within the context of both contemporary artistic production and cultural trends of the fifties and sixties. She uses interviews, Thompson’s diary entries and letters to his family, and his work to give a thoughtful and thorough interpretation of his art and persona. She traces Thompson’s development–psychologically, socially, and artistically–effectively portraying his first encounters with art and bohemian culture and his intensely active period in Europe shortly before his death in Rome at the age of 29.
Bob Thompson’s life intersects several important currents in recent American culture, and his work reveals an unfinished quest for communal identity, says Wilson. His use of postmodern techniques of appropriation and pastiche embraced both the Western tradition and cultural resources specific to the African American experience. The publication of Bob Thompsonrecognizes the important role of the artist in the vanguard of twentieth-century American art. #1219R pp. 200 illusts 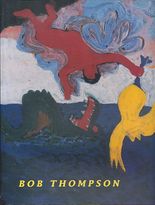