“Making is a higher form of thinking,” claims Gregor Schneider, who began to make art as an adolescent. So urgent was his desire to be an artist that, in order to pay for the materials he needed to make his sculptures, he even worked as a gravedigger. Introverted, self-effacing and a close observer of human behavior–with a particular passion for the lowliest of social categories–Schneider has developed an all-absorbing identification with his work, living together with it night and day in an apartment he soundproofed from the rest of the world. Schneider has tried his hand at film, painting and sculpture, but most remarkable is the installation he created between 1985 and 1994, in his home. There he built rooms within rooms, walls in front of walls, doors that led nowhere and windows that opened onto dead spaces. When asked about his motivations, he would defiantly proclaim, “I can’t do anything else.” pp. 228 illusts First Edition #0219 (Architect’s stamp on prelim.) 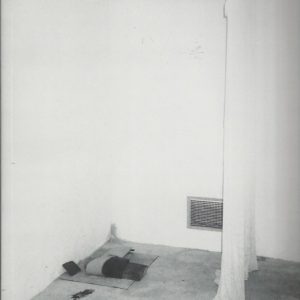