Home › Shop › ASTERIX (Goscinny & Uderzo): and TINTIN (Herge) › TINTIN and THE SECRET OF THE UNICORN

TINTIN and THE SECRET OF THE UNICORN

Tintin stumbles across a model ship at the Old Street Market. Only it isn’t just any model ship-it’s the Unicorn, carved by one of Haddock’s ancestors, and it holds a clue to finding pirate treasure! #1118R/0420/0621

The Secret of the Unicorn (French: Le Secret de La Licorne) is the eleventh volume of The Adventures of Tintin, the comics series by Belgian cartoonist Hergé. The story was serialised daily in Le Soir, Belgium’s leading francophone newspaper, from June 1942 to January 1943 amidst the Nazi German occupation of Belgium during World War II. The story revolves around young reporter Tintin, his dog Snowy, and his friend Captain Haddock, who discover a riddle left by Haddock’s ancestor, the 17th century Sir Francis Haddock, which could lead them to the hidden treasure of the pirate Red Rackham. To unravel the riddle, Tintin and Haddock must obtain three identical models of Sir Francis’s ship, the Unicorn, but they discover that criminals are also after these model ships and are willing to kill in order to obtain them.

While browsing on the Brussels Voddenmarkt/Marché aux puces at the Vossenplein in the Marollen, Tintin purchases an antique model ship which he intends to give to his friend, Captain Haddock. Two strangers, model ship collector Ivan Ivanovitch Sakharine and antique-scout Barnaby, independently try to persuade Tintin to sell the model to them. He also sees detectives Thomson and Thompson on the look-out for a pickpocket. At Tintin’s flat, Snowy accidentally knocks the model over and breaks its mainmast. Having repaired it, and shown the ship to Haddock, Tintin discovers that the ship is named the Unicorn, after a ship commanded by Haddock’s ancestor. While Tintin is out, the ship is stolen from his apartment; in the investigation, he discovers that Sakharine owns an identical model, also named the Unicorn. At home, Tintin discovers a miniature scroll, and realises that this must have been hidden in the mast of the model which Snowy had broken. Written on the parchment is a riddle: “Three brothers joined. Three Unicorns in company sailing in the noonday sunne will speak. For ’tis from the light that light will dawn, and then shines forth the Eagle’s cross”.[1]

Upon hearing of the riddle, Captain Haddock explains that the Unicorn was a 17th-century warship captained by his ancestor, Sir Francis Haddock, but seized by a pirate band led by Red Rackham. Alone of his crew to survive the capture, Sir Francis killed Rackham in single combat and scuttled the Unicorn; but later built three models, which he left to his sons. Meanwhile, Barnaby requests a meeting with Tintin, but is gunned down on Tintin’s doorstep before he can speak, and points to sparrows as a cryptic clue to the identity of his assailant before falling unconscious. Later, Tintin is kidnapped by the perpetrators of the shooting: the Bird brothers, two unscrupulous antique dealers who own the third model of the Unicorn. They are behind the theft of Tintin’s model and have also stolen Sakharine’s parchment, knowing that only by possessing all three parchments can the location of Red Rackham’s treasure be found. Tintin escapes from the cellars of the Bird brothers’ country estate, Marlinspike Hall, while the Captain arrives with Thomson and Thompson to arrest them. It is revealed that the Bird Brothers have only one of the parchments, as two were lost when their wallet was stolen. It is also revealed that Barnaby survived and has made a full recovery, much to Max Bird’s enragement. The Bird brothers are arrested. Tintin and Thomson and Thompson track down the pickpocket, Aristides Silk, a kleptomaniac who has a penchant for collecting wallets, and obtain the Bird Brothers’ wallet, containing the missing two parchments. By combining the three parchments and holding them to light, Tintin and Haddock discover the coordinates (20°37’42.0″ N 70°52’15.0″ W, 82 km north of the Dominican Republic[2]) of the lost treasure and plan an expedition to find it.[3]

The Secret of the Unicorn was serialized amidst the German occupation of Belgium during World War II. Hergé had accepted a position working for Le Soir, Belgium’s largest Francophone daily newspaper. Confiscated from its original owners, the German authorities permitted Le Soir to reopen under the directorship of Belgian editor Raymond de Becker, although it remained firmly under Nazi control, supporting the German war effort and espousing anti-Semitism.[4] After joining Le Soir on 15 October 1940, Hergé became editor of its new children’s supplement Le Soir Jeunesse, with assistance by old friend Paul Jamin and cartoonist Jacques Van Melkebeke, before paper shortages forced Tintin to be serialised daily in the main pages of Le Soir.[5] Some Belgians were upset that Hergé was willing to work for a newspaper controlled by the occupying Nazi administration,[6] although he was heavily enticed by the size of Le Soir‘s readership, which reached 600,000.[7] Faced with the reality of Nazi oversight, Hergé abandoned the overt political themes that had pervaded much of his earlier work, instead adopting a policy of neutrality.[8] Without the need to satirise political types, entertainment producer and author Harry Thompson observed that “Hergé was now concentrating more on plot and on developing a new style of character comedy. The public reacted positively”.[9]

The Secret of the Unicorn was the first of The Adventures of Tintin which Hergé had collaborated on with Van Melkebeke to a significant degree; biographer Benoît Peeters suggested that Van Melkebeke should rightly be considered the story’s “co-scriptwriter”.[10] It was Hergé’s discussions with Van Melkebeke that led him to craft a more complex story than he had in prior Adventures.[11] Van Melkebeke had been strongly influenced by the adventure novels of writers like Jules Verne and Paul d’Ivoi, and this influence is apparent throughout the story.[10] The inclusion of three hidden scrolls has parallels with Verne’s 1867 story, The Children of Captain Grant, which Van Melkebeke had recommended to Hergé.[12] Hergé acknowledged Van Melkebeke’s contribution by including a cameo of him within the market scene at the start of the story; this was particularly apt as Van Melkebeke had purchased his books in Brussels’ Old Market as a child.[13] 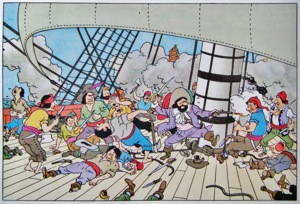 In previous works, Hergé had drawn upon a variety of pictorial sources, such as newspaper clippings, from which to draw the scenes and characters; for The Secret of the Unicorn he drew upon an unprecedented variety of these sources.[16] In drawing many of the old vessels, Hergé initially consulted the then recently published L’Art et la Mer (“Art and the Sea“) by Alexandre Berqueman.[17] Seeking further accurate depictions of old naval vessels, Hergé consulted his friend Gérard Liger-Belair, who owned a Brussels shop specialising in model ships. Liger-Belair produced plans of a 17th-century French fifty-gun warship for Hergé to copy; Le Brillant, which had been constructed in Le Havre in 1690 by the shipwright Salicon and then decorated by Jean Bérain the Elder.[18]

He also studied other vessels from the period, such as the Le Soleil Royal, La Couronne, La Royale and Le Reale de France, to better understand 17th-century ship design. It was from the Le Reale de France that he gained a basis for his design of the Unicorn‘s jolly boat.[19] No ship named the Unicorn was listed in the annals of the French Navy, but Hergé instead took the name from a British frigate which had been active in the mid-18th century; the fictional ship’s unicorn figurehead was also adopted from the frigate.[19]

The character of Red Rackham was partly inspired by Jean Rackam, a fictional pirate who appeared in a story alongside female pirates Anne Bonny and Mary Read that Hergé encountered in a November 1938 edition of Dimanche-Illustré [fr].[20] Red Rackham’s looks and costumes were also inspired by the character Lerouge, who appears in C. S. Forester‘s novel, The Captain from Connecticut, and by the 17th-century French buccaneer Daniel Montbars.[21] The name of Marlinspike Hall—Moulinsart in French—was based upon the name of the real Belgian town, Sart-Moulin.[22] The actual design of the building was based upon the Château de Cheverny, albeit with the two outer wings removed.[23] In introducing Francis Haddock to the story, Hergé made Captain Haddock the only character in the series (except Jolyon Wagg, introduced later) to have a family and an ancestry.[24] The Secret of the Unicorn was set entirely in Belgium and was the last Adventure to be set there until The Castafiore Emerald.[25] It would also be Hergé’s favourite story until Tintin in Tibet.[26] The final two pages of the adventure mark the first appearance of Tintin’s iconic costume of a white shirt under a blue sweater; having worn a variety of clothes in previous volumes, notably a brown suit and a yellow shirt with a red tie, he would don this attire in all subsequent books.[27]

TINTIN and THE SECRET OF THE UNICORN