TINTIN IN AMERICA : The Adventures of Tintin

In Tintin in America (1932), Tintin will confirm his reputation of righter of wrongs. He will face Al Capone and his goons as well as all villains of all sorts. Hergé shows his generous vision of the world as he offers a very well documented depiction of the sad plight of the Native Americans. Tintin’s fame extends beyond the Atlantic Ocean. So, when he arrives in Chicago in the middle of the Prohibition, all the bandits of the city have gathered to make sure that he gets the most uncomfortable reception. Tintin will need to use all his determination and intelligence to survive ! #1016R/1219/0420/0621

Tintin in America (French: Tintin en Amérique) is the third volume of The Adventures of Tintin, the comics series by Belgian cartoonist Hergé. Commissioned by the conservative Belgian newspaper Le Vingtième Siècle for its children’s supplement Le Petit Vingtième, it was serialized weekly from September 1931 to October 1932 before being published in a collected volume by Éditions du Petit Vingtième in 1932. The story tells of young Belgian reporter Tintin and his dog Snowy who travel to the United States, where Tintin reports on organized crime in Chicago. Pursuing a gangster across the country, he encounters a tribe of Blackfoot Native Americans before defeating the Chicago crime syndicate.

Following the publication of Tintin in the Congo, Hergé researched a story set in the United States, desiring to reflect his concerns regarding the treatment of Native communities by the U.S. government. Bolstered by a publicity stunt, Tintin in America was a commercial success in Belgium and was soon republished in France. Hergé continued The Adventures of Tintin with Cigars of the Pharaoh, and the series became a defining part of the Franco-Belgian comics tradition. In 1945, Tintin in America was re-drawn and colored in Hergé’s ligne-claire style for republication by Casterman, with further alterations made at the request of his American publisher for a 1973 edition. The critical reception of the work has been mixed, with commentators on The Adventures of Tintin arguing that although it represents an improvement on the preceding two installments, it still reflects many of the problems that were visible in them. The story was adapted for both the 1976-7 West End play Tintin’s Great American Adventure and the 1991 Ellipse/Nelvana animated series The Adventures of Tintin.

In 1931, Tintin, a reporter for Le Petit Vingtième, goes with his dog Snowy on an assignment to Chicago, Illinois, to report on the city’s organised crime syndicate. He is kidnapped by gangsters and brought before mobster boss Al Capone, whose criminal enterprises in the Congo were previously thwarted by Tintin. With Snowy’s help, Tintin subdues his captors, but the police reject his claims, and the gangsters escape. After surviving attempts on his life, Tintin meets Capone’s rival Bobby Smiles, who heads the Gangsters Syndicate of Chicago. Tintin is unpersuaded by Smiles’ attempt to hire him, and after Tintin orchestrates the arrest of his gang, Smiles escapes and heads west.[1]

Tintin pursues Smiles to the Midwestern town of Redskin City. Here, Smiles convinces a tribe of Blackfeet Native Americans that Tintin is their enemy, and when Tintin arrives, he is captured and threatened with execution. After escaping, Tintin discovers a source of underground petroleum. The U.S. army then forces the Natives off their land, and oil companies build a city on the site within 24 hours. Tintin evades a lynch mob and a wildfire before discovering Smiles’ remote hideaway cabin; after a brief altercation, he captures the gangster.[2]

Returning to Chicago with his prisoner, Tintin is praised as a hero, but gangsters kidnap Snowy and send Tintin a ransom note. Tracing the kidnappers to a local mansion, Tintin hides in a suit of armor and frees Snowy from the dungeon. The following day, Tintin is invited to a cannery, but it is a trap set by gangsters, who trick him into falling into the meat-grinding machine. Tintin is saved when the machine workers go on strike and then apprehend the mobsters. In thanks, he is invited to a banquet in his honor, where he is kidnapped and thrown into Lake Michigan to drown. Tintin survives by floating to the surface, but gangsters posing as police capture him. He once again overwhelms them and hands them over to the authorities. Finally, Tintin’s success against the gangsters is celebrated by a ticker-tape parade, following which he returns to Europe.[3] 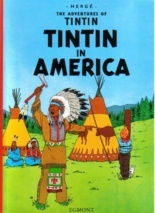 TINTIN IN AMERICA : The Adventures of Tintin