Originally published in 1931. This brand new translation by Leslie Lonsdale-Cooper and Michael Turner, the original Tintin translators, includes a fascinating foreword describing the publication history of Tintin’s African adventure and placing it in its historical context. In his portrayal of the Belgian Congo, the young Herge reflects the colonial attitudes of the time… he depicted the African people according to the bourgeois, paternalistic stereotypes of the period – an interpretation that some of today’s readers may find offensive.

The young reporter Tintin and his faithful dog Snowy set off on assignment to Africa. But a sinister stowaway follows their every move and seems set on ensuring they come to a sticky end. Tintin and Snowy encounter witch doctors, hostile tribesmen, crocodiles, boa constrictors and numerous other wild animals before solving the mystery and getting their story. First published in book form in 1931 (in black & white only), Tintin in the Congo reflects the colonial attitudes of that period in its depiction of African people. Herge himself admitted that he was influenced by the bourgeois, paternalistic stereotypes of the period. This is also true of the treatment of big-game hunting and the attitude towards animals 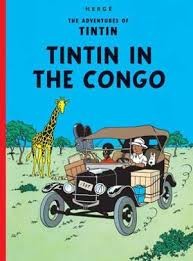