Above the Starry Frame

“A true story of migration and enduring love from the Irish potato famine to the Australian goldfields in the time of the Eureka Stockade” viii, 370 p. ; 24 cm. #100122

William Irwin was an Irish farm boy who came to Australia alone in 1849, aged 18. As a refugee from Ireland’s Potato Famine, he left behind a world of hunger and poverty, and a culture steeped in oppressive tradition. Young and adventurous, and with the will to make something of his life, William set himself up in the heart of gold rush Ballarat, one of the wealthiest 19th century cities in the world. A digger and publican, he was swept up in the events leading to the Eureka Stockade, both as a witness and a player in this landmark event that shaped colonial society.

“Helen Townsend’s Above the Starry Frame presents itself as both biography and fiction. Townsend herself is very clear about the distinction, provides detailed bookends, markers and an introduction which state exactly what she found through research, and what she imagined. The letters she did find, and the outline of her story are evocative enough, providing the reader with the story of an 18 year old boy who left Ireland for Australia at the end of the potato famine in 1849. Young William Irwin ends up in Ballarat where he becomes a digger on the gold mines during the Eureka Stockade. Later, he becomes a publication, marries 3 times and suffers both joy and great pain. The real letters written to Irwin primarily by his family back in Ireland become the markers for both the progression of time in the book and for Irwin’s development, but the real story, and what makes this a rich exploration, is in Townsend’s imagining.

As Irwin’s great granddaughter, this is certainly Townsend’s story – one that takes what is known and creates what isn’t through the considerable skills that Townsend has honed through her large body of fiction. There is certainly great historical importance in this story of the Eureka stockade, and in the slow progress of democracy in Australia that followed. But the real importance of this story isn’t about the historical events surrounding William, it’s about the small details in the life of this migrant – the imagined, fictional events that tell the deeper story of humanity. It’s ourselves we will recognise as we watch William struggling to stay in touch with the family he left behind:

The settings too, though hardly imagined, take on an immediacy that makes them feel real to the reader. From the small farm at Knockaleery Ireland, with its certainties and order, to the excitement and frustration of the Ballarat diggings, Townsend captures all of those minute details that make a scene come alive:

Above the Starry Frame is a book which tracks a time in Australia’s history where many themes come together. This story doesn’t shy away from any of them. Townsend gives the women in this story – from William’s sister Eliza back in Knockaleery to William’s wives, voices. They struggle with the same things William does, but in a domestic sense: notions of equality, of maintaining a balance between decorum, society and self-actualisation, child rearing, and dealing with loss and death are all addressed sensitively and in a way that beautifully balances the historical with the personal. This is a story that transcends the limitations of “what actually happens” giving us a deeper sense of truth. What it succeeds at, is not so much uncovering the events that led to and followed the Eureka Stockade, but rather, creating a real, true sense of the people that lived then and what it means in terms of who we all are now.” (Reviewed by Magdalena Ball) 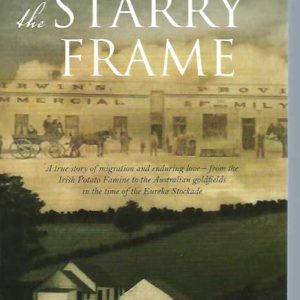 Above the Starry Frame