Home › Shop › AUSTRALIANA › From Postbox to Powerhouse: A Centenary History of the Department of the Prime Minister and Cabinet 1911-2010

From Postbox to Powerhouse: A Centenary History of the Department of the Prime Minister and Cabinet 1911-2010

The Department of Prime Minister and Cabinet is the heart of government in Australia. Its history reveals the growing sophistication in the way politics and government are managed, and provides fascinating glimpses of the day – to – day workings of the most important institution in the country.

Now a century old, the Department of Prime Minister and Cabinet is at the heart of government in Australia. From Postbox to Powerhouse tracks its history, from its very humble beginnings as a department that did little more than circulate papers between other government departments.

Since the start of World War I, the federal government has extended its activities. As prime ministers became involved in all areas of government, so, decade by decade, the department became increasingly influential in its own right. Prime ministers have required talented and dedicated people to advise them. Today, the department is the centre of government, a powerhouse which not only serves prime ministers but in doing so must address the major national issues of the day, including climate change, capacity constraints, terrorism and skills shortages.

Through this history of a government department, we have a bird’s-eye view of the radical changes in the way politics and government have been managed over a century, and many fascinating glimpses of the day-to-day workings of what is now one of the most important institutions in the country. pp. xxiv, 336 illusts #0118 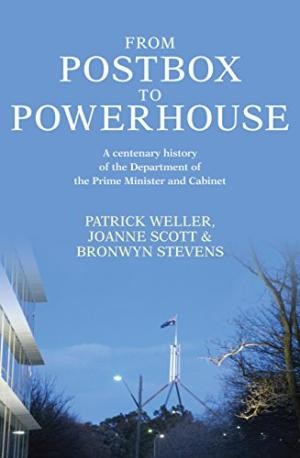 From Postbox to Powerhouse: A Centenary History of the Department of the Prime Minister and Cabinet 1911-2010