Midnite: The Story of a Wild Colonial Boy

Illustrated by Ralph Steadman.Midnite: the story of a wild colonial boy is set in
Australia in the mid-nineteenth century and recounts
the adventures of a “rather stupid,” good natured
seventeen year old boy, who orphaned with the
death of his father, takes the advice of Khat, a talking
Siamese cat, who suggests that he become a famous
bushranger, by stealing horses and cattle and
robbing coaches. The boy calls himself Captain
Midnite and forms a gang consisting of the animals
about the house; Khat, who is “the brains”; Dora, “a
rather silly cow, who was not nearly so young as she
thought she was”; Red Ned, a noble horse; Gyp, a
sheepdog; and Major, an irritable crafty cockatoo.
The book is made up of Midnite’s adventures, which
land him in jail numerous times and involve him in
romance, exploration, a discovery of gold, even an
audience with Queen Victoria.
Like so many good children’s books, Midnite also
offers a satirical, humorous read for adults as Stow
laughs at many aspects of Australian life which he
has elsewhere treated very seriously. #0421 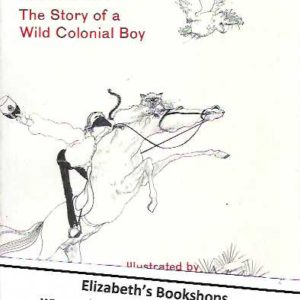 Midnite: The Story of a Wild Colonial Boy