Pen Portraits tells the story of the achievements of Australia’s earliest women writers.

Despite being confined to a life within the home in a frontier society, some talented (and very determined) women in colonial Australia carved out careers as writers. Among them were writers of popular serials, whose latest instalments were as eagerly awaited as the latest episode is in today’s TV ‘soapies’; writers of newspaper features and columns; even a foreign correspondent.

But it was not until the 1880s that a very few won full-time positions as journalists. For some this was the exciting storming of an all-male preserve, for most it meant the society pages – the ‘deadly dreary ruck of long dress reports’.

Nevertheless, there was a handful of women who ran the new women’s magazines, and in these magazines women writers carried on the fight for the vote, for the right to an education, for freedom to work and freedom from unhappy marriages.

Patricia Clarke, a journalist for many years and the author of The Governesses and A Colonial Woman, has uncovered the stories of almost a hundred women, from the first woman to publish in Australia to those whose work gained international acclaim; from the writers of moral tales to those whose ‘daring’ copy brought a raffish touch to the newspapers of the day; from crusading reformers to society ladies who wrote the social notes. #0521 (Closed tear to back of dustjacket.) xi, 289 p. : ill. ; 24 cm. 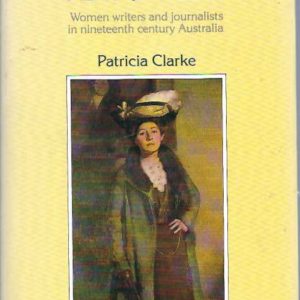