Home › Shop › BOATS & MARITIME SHIPWRECKS YACHTING › Voyage of the Africaine, The. A Collection of...

Voyage of the Africaine, The. A Collection of Journals, Letters and Extracts from Contemporary Publications(Told by Mary Thomas, Robert Gouger and Other Passengers)

In 1834 and 1835, under command of John Finlay Duff, Africaine sailed via Calcutta, Mauritius, and Hobart to Sydney.

Robert Gouger and John Brown chartered Africaine in 1836 to carry goods and passengers as part of the First Fleet of South Australia.[2] She departed London Docks on 28 June 1836 and arrived at Holdfast Bay on 8 November 1836. Duff remained the captain, with his new wife on board.[5][Note 1] Soon after unloading her passengers and cargo at Holdfast Bay, Africaine went on to Hobart Town in Van Diemen’s Land (now Tasmania) to acquire more supplies. She arrived in ballast at Launceston on 13 March 1837 from Gulf St. Vincent.[8] She then traded between Hobart and Launceston.[9]

In 1838 her owner became John Griffiths et al., of Launceston. In 1840, under the command of William Dutton, she visited the whaling grounds of New Zealand.[10] Then in November 1841 her owner became James Henty, also of Launceston.[1] Africaine was wrecked in a storm on 23 September 1843 with the loss of two of her crew. She was on a voyage from Newcastle to Quebec when she wrecked off Cape St Lawrence, Cape Breton Island.[11][5] Her entry in LR for 1843 carries the annotation “LOST”.[12] 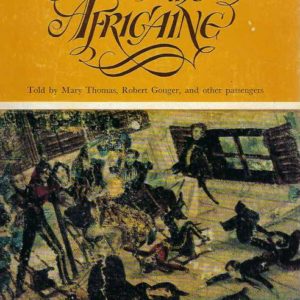 Voyage of the Africaine, The. A Collection of Journals, Letters and Extracts from Contemporary Publications(Told by Mary Thomas, Robert Gouger and Other Passengers)