Brian Burke was Western Australia’s 23rd Premier, and served from 25th February 1983 until his resignation on 25th February, 1988 – exactly five years to the day. ‘A Tumultuous Life’ is his story of a lifetime including those five years; the toll they took on his family, and the ‘personalities’ and events that led to his leaving office when he was appointed Australia’s Ambassador to Ireland and the Holy See. It describes the time he spent in jail after his conviction for misusing his travel allowance and is desperately sad in funny in others. This is not a mud-slinging political book, of who was to blame – but an honest appraisal by a Premier who was thought of highly by a vast majority of Western Australians. There are chapters on the people who caught the attention of the public for all the ‘right’ or ‘wrong’ reasons – and much more. Brian Burke says: I have written it with honesty and candour… it will open some wounds, but hopefully heal others”.

“”A Tumultuous Life is my story of my interesting 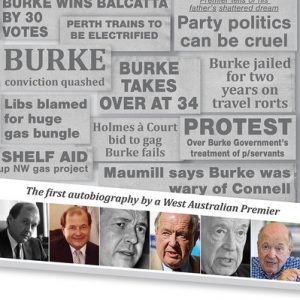