Akos grew up in Hungary, which was an axis power ally of Germany during World War II. As a teenager he was called up to service in the Hungarian army. He lost an eye on the battlefield and was sent to an eye hospital in Berlin where he heard Adolf Hitler give his last public speech at the Brandenburg Gate, from where Akos recounted, ‘The Fuhrer spoke of having a secret weapon that would help them win the war’. Akos mused that perhaps Hitler was talking about some kind of nuclear device. Soon afterwards, Akos was in a troop train above Dresden where he witnessed the allied carpet bombing of that old city, thereby concluding that Germany would lose the war having faced such intense bombing. At war’s end, Akos returned to Hungary where he became a school sports master. But Hungary was not the country he grew up in, for the Iron Curtain across had fallen Europe and by then Hungary had a communist government under Soviet control. He became a living legend of the school and around the Claremont area of Perth, where he was seen riding his iconic bicycle everywhere. Akos was a symbol of the post-World War II migrants who came to Australia from eastern Europe to make a new life and who contributed so much to Australia and our way of life. Akos famously brought eastern European gymnastics to Christ Church and Perth. Within a few years, the teams from the school were winning the WA gymnastics championships and continued to do so for a long time. pp. 164 #200422 (Cover crease) 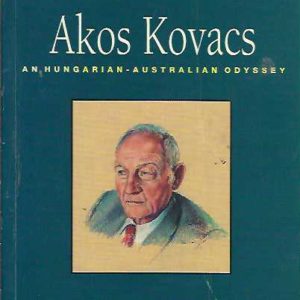