Legendary figure in early colonial civil engineering who created the Goldfields Pipeline Scheme, which brought water 560 kms to the desert Eastern Goldfields and whose enigmatic death is still a subject of discussion. Previous writings on Charles Yelverton O’Connor, the farsighted Irish civil engineer who has become an almost legendary figure in the history of Western Australia, have tended to concentrate on the political, economic and engineering aspects of his life and work. Today, his works are revered and his memory honored, though whether this enduring interest stems as much from a fascination with the events surrounding his tragic suicide than with a genuine appreciation of his work is debatable. In this biography, the author seeks to focus more on the man himself, the quintessential Victorian, brimming with confidence and a belief that the great technical advances of the era, together with social reforms, would eventually bring harmony and prosperity to all. As a man of his age, his character can only be understood by understanding the aspirations of the age – the ideals and values that shaped his life and, ultimately, the manner of his untimely death. xiii, 287 p. : ill., maps, ports. ; 25 cm. #0917/0218/0219/020522

“Charles Yelverton O’Connor is a legendary figure in early colonial civil engineering. But the fame of his great works, particularly the Goldfields Pipeline Scheme, which brought water 560 kilometres to the desert Eastern Goldfields of Western Australia, has almost been matched by that of his enigmatic death.” “O’Connor’s work, now revered and celebrated, was misunderstood and undervalued by many of his contemporaries. Wounding criticism of the Goldfields Pipeline and libellous newspaper reporting aimed directly at O’Connor contributed much to the final crisis of this proud, deep-thinking, private man.” “This new biography by Tony Evans introduces fresh research material in examining O’Connor’s character, influences and background. Evans confirms his subject as a tragic genius whose works changed the face and fortunes of both New Zealand and Australia in the second half of the nineteenth century.”
O’Connor, C. Y. (Charles Yelverton), 1843-1902. | Civil engineers — Western Australia — Biography. | Water-supply engineering — Western Australia — Goldfields Region — History — 19th century. 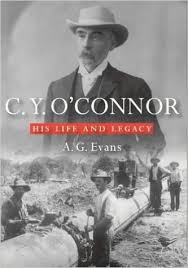