Do Not Yield to Despair: Frank Hugh Hann’s Exploration Diaries in the Arid Interior of Australia, 1895-1908

Account of Frank Hann’s travels in Western Australia accompanied by Talbot, Minnie, Dora, Thorlow and Spider, includes references to Aboriginal people that Hann met during his travels and their treatment; includes the naming of Lake Disappointment and other geographical features.
xi, 426 p. : ill., maps ; 30 cm. #0921 SCARCE Signed by Editor (inscription)
William Hann (1837-1889), and Frank Hugh Hann (1846-1921), explorers and pastoralists, were the sons of Joseph Hann and his wife Elizabeth, née Sharpe. The family migrated from Wiltshire in 1851 to the Westernport district in Victoria. In 1862 Joseph Hann was attracted to the newly-opened upper Burdekin district in Queensland where in partnership with Richard Daintree and some Melbourne investors he took up Bluff Downs, Maryvale and Lolworth stations. After Joseph was drowned in the great Burdekin flood of January 1864, his sons faced resistance from Aboriginal traditional landowners, and struggled with speargrass, dingoes and falling wool prices and in 1870 William had to overland their last 19,000 sheep to Victoria; Lolworth and Bluff Downs were surrendered and he ran cattle at Maryvale.

In 1872 William was given charge of a well-organized official party to explore the interior of the Cape York Peninsula. The country was difficult and Hann was often irked by assistants whose bushcraft was less competent than his. Dense scrub prevented him from reaching his goal on the Endeavour River but the party located some fair pastoral country and named the Tate, Daintree and Palmer Rivers. On the latter he reported traces of gold which led to James Mulligan’s prospecting party and a dramatic gold rush. The new fields soon provided Hann with a market for his cattle and he prospered. In 1886 after a trip overseas he introduced axis deer from Ceylon to the Maryvale district. He was also a benefactor of St James’s Cathedral, Townsville, and a member of the Dalrymple Divisional Board. He died suddenly while swimming near Townsville on 5 April 1889, survived by his wife and two daughters; a son had died in infancy. A daring horseman and whip and a first-class bushman, Hann was notable among the first generation of North Queenslanders.

Frank Hann, born on 19 October 1846, was managing Lolworth station by 1866 and in 1875, when the cattle industry revived, took up Lawn Hill station in the Gulf country. Refusing to sell in good times, he was overtaken by low prices, poor seasons and the outbreak of redwater fever in the 1890s, and walked off the station in 1896. During his tenure at Lawn Hill, however, he and his manager, Jack Watson, were said to have killed and mutilated numbers of the local Waanyi people. The diarist Emily Caroline Creaghe (later Barnett), who visited neighbouring Carl Creek station in March 1883, recorded the casual aggression that marked European-Aboriginal relations on the Gulf pastoral holdings: ‘Mr Bob Shadforth went up to “Lorne [sic] Hill” … about 40 miles away … Mr Watson has 40 prs of blacks’ ears nailed round the [Lawn Hill homestead] walls collected during raiding parties after the loss of many cattle speared by the blacks’. Some days later Mrs Creaghe described the abduction of an Aboriginal woman: ‘Mr Shadforth put a rope round the gin’s neck & dragged her along on foot, he was riding. This seems to be the usual method ’. Social activities on the station included visits from Jack Watson and the local Native Police officer. Mrs Creaghe’s comments regarding ‘the usual method’ of treating Aboriginal women was borne out by Hann’s own diary on 11 October 1895 when he noted that he had ‘chained up’ a ‘gin’ named Dora at Lawn Hill because she ‘would not do as I wished’.

In 1889 at Lawn Hill, Frank survived despite being shot at almost point-blank range by the Aboriginal bushranger Joe Flick, who was subsequently killed by the police and Hann’s men. Frank helped build his own legend by writing to the newspapers openly admitting that he had been absent when Flick first arrived, because ‘I had been after blacks who had been playing up on my run for two days’. He said he wanted to give his version of events since this tragedy ‘will get widely circulated, and no doubt have wrong constructions put on it … I do not know what the public will think of our action in this matter, nor do we care, as I, for one, know I was doing a public service in securing this desperado, dead or alive’.

Frank Hann’s conduct, not surprisingly, became part of local Aboriginal oral history. Doomadgee Mission was subsequently established in the north-east portion of the lease. Penniless and very miserable he overlanded to Western Australia with 6 Aboriginal workers and 67 horses in 1896. He searched in vain for suitable country in the Nullagine district and in 1897 decided to return to Queensland but was diverted to a short-lived gold rush at Mount Broome in the West Kimberley district. In the winter of 1898 he penetrated the Leopold Ranges, till then a barrier to expansion, named the Charnley and Isdell Rivers and located some fine areas of pastoral country. This feat of bushmanship and endurance was remarkable for Hann was over 50 and suffering from the after-effects of a broken thigh and the area he traversed was one of the most difficult in Australia and peopled by unwelcoming Aboriginal landowners. He took up over 1000 square miles (2590 km²) of the new country but had no funds to buy stock and it was pioneered by established Kimberley families. Hann lived in Perth for four years and then turned to prospecting. Authorized by the Western Australian government to explore the inland desert, he opened a track from Laverton to the Warburton Ranges on the South Australian border in 1903 and investigated a rumour of gold at Queen Victoria Springs in 1907.

While exploring near Mount Morgans in 1909, Hann told a Perth newspaper by letter that he and members of his party had been ambushed and almost fatally speared by four ‘wild’ Aboriginal men, including one wearing a red band. Hann said that: ‘Had I shot the black with the red band I would have cut his head off and sent the skull to Mr F. Brockman, of Perth, who asked me to send him one, as a friend in London wanted one. I was very sorry that I could not send him the four, but later on I got him a splendid one’ (Western Mail, 10 April 1909, p. 45). The incident brought criticism of Hann in both the serious and the sensational press, which dubbed him ‘Head Hunter Hann’; following investigations by the police and the chief protector of Aborigines, the Mines Department withdrew all assistance to him, effectively ending his exploring career. 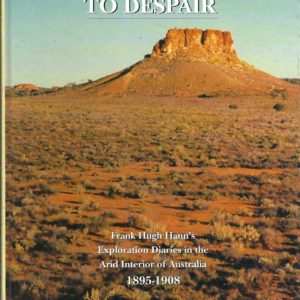 Do Not Yield to Despair: Frank Hugh Hann’s Exploration Diaries in the Arid Interior of Australia, 1895-1908