Dryblower Murphy, His life and times

Murphy was born in Castlemaine, Victoria, Australia, the tenth child and eldest son of Irish-born Edwin Murphy (plasterer and clay modeller), and his English wife Ellen, née Greenslade. He was educated at a state school at South Melbourne and began employment with his father at an early age. Murphy developed a good tenor voice, and joined the J. C. Williamson Opera Company, sang in the chorus and toured with it for two or three years. Following the gold rush of 1892 Murphy went to Western Australia, arriving in Coolgardie in 1894 after walking from Perth, Western Australia. There he did some dry blowing at Fly Flat and participated in sing-songs around pianos in local public bars.

Goldfields
The Coolgardie Miner was launched by Billy Clare with help from Murphy, who contributed a weekly gossip column using the pen-name “Dryblower”, a name which Murphy used for the rest of his life. Murphy travelled north-east of Coolgardie to I.O.U (Bulong) and with two fellow prospectors, found a rich source of gold. With one of the other prospectors, Murphy travelled to London to float the ‘Esmerelda’ goldmine, but it slumped and he returned home. Soon afterwards he returned to England, writing for financial and social papers; he also helped to expose the hoaxer Louis de Rougemont before conducting him on a lecture tour. Murphy also enjoyed the London Gilbert and Sullivan operas, in which he sometimes sang.

For a short time the Sporting Life: Dryblower’s journal was associated with Dryblower.

While on the goldfields Murphy had begun writing verse for the press[2] and about 1900 joined the staff of the Perth Sunday Times, to which he contributed a column entitled “Verse and Worse” for almost 40 years. In 1904 Murphy published a novel, Sweet Boronia: A Story of Coolgardie[citation needed],[3] which was followed in 1908 by a selection of his verses, Jarrahland Jingles.

Move to Perth
In 1910 he settled in Perth, Western Australia and continued to write for the Sunday Times[5][6] and also did public readings of his poetry A further selection of poetry, Dryblowers Verses, was published in 1924.

Death
Murphy died at Perth after an illness of some months on 9 March 1939 . He was survived by his wife and three sons. 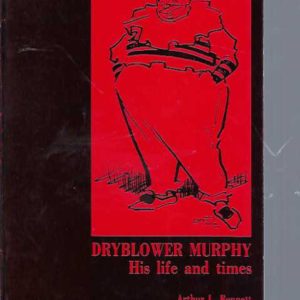 Dryblower Murphy, His life and times