Fenian Wild Geese, The: From the last Convict Ship to the Catalpa Rescue.

In 1867, sixty two Fenians were transported to Fremantle on board the Houghoumont, signalling the end of convict transportation to Australia.

This factual account of their voyage has been compiled from the diaries and other writings of these unfortunate passengers.

John Boyle O’Reilly was the first man to ever successfully escape from the penal colony. Some of his comrades died, others were amnestied or released.

In 1876 the remaining six Fenians were rescued in one of the most daring prison escapes ever recorded, The Catalpa Escape (or Catalpa Rescue). Linking Ireland, Australia and The United States of America their escape represents the ultimate triumph of the small and helpless over seemingly insurmountable odds.

Ormonde D.P Waters was a former editor of the Journal of the Australian Irish Heritage Association and former Fremantle Prison Officer.

The Wild Geese Memorial commemorates the escape of six Irish Fenian prisoners. The memorial is a statue depicting six wild geese in flight, the design of which was initiated by an Irish-Australian Perth citizen, the late Francis Conlan, whose name is also recorded on the memorial.

At Easter 1876 six military Fenians, political prisoners, escaped from Fremantle Gaol via Rockingham, just south of Fremantle. They were Robert Cranston, Thomas Darragh, Michael Harrington, Thomas Hassett, Martin Hogan, and James Wilson. In 1869, one of these political prisoners, John Boyle O`Reilly, escaped from a gang building the road between Bunbury and Busselton, and got away to America. On O`Reilly`s recommendation, the ship Catalpa was purchased and refitted. Captain George Anthony was a New England whaling skipper.

Arrangements had to be made for agents to travel from the United States to Fremantle, to enable them to spend several months preparing for the escape, which took place from Rockingham Beach on Easter Monday, 17 April 1876. The fugitives and their rescuers were pursued by the water police in their sailing cutter and by the armed pensioner guards in the steamer Georgette, which fired her cannon at the Catalpa eliciting Captain Anthony`s famous response: “That`s the American flag. I am on the high seas. My flag protects me. If you fire on this ship, you fire on the American flag.” Six wild geese had flown to freedom into the west. 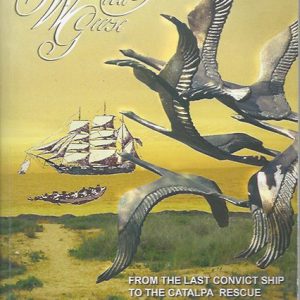 Fenian Wild Geese, The: From the last Convict Ship to the Catalpa Rescue.