Sir John Forrest GCMG (22 August 1847 – 2 September[1] 1918) was an Australian explorer and politician. He was the first premier of Western Australia (1890–1901) and a long-serving cabinet minister in federal politics.

Forrest was born in Bunbury, Western Australia, to Scottish immigrant parents. He was the colony’s first locally born surveyor, coming to public notice in 1869 when he led an expedition into the interior in search of Ludwig Leichhardt. The following year, Forrest accomplished the first land crossing from Perth to Adelaide across the Nullarbor Plain. His third expedition in 1874 travelled from Geraldton to Adelaide through the centre of Australia. Forrest’s expeditions were characterised by a cautious, well-planned approach and diligent record-keeping. He received the Gold Medal of the Royal Geographical Society in 1876.

Forrest became involved in politics through his promotion to surveyor-general, a powerful position that entitled him to a seat on the colony’s executive council. He was appointed as Western Australia’s first premier in 1890, following the granting of responsible government. The gold rushes of the early 1890s saw a large increase in the colony’s population and allowed for a program of public works, including the construction of Fremantle Harbour and the Goldfields Water Supply Scheme. Forrest’s government also passed a number of social reforms, maintaining power through several elections in an era before formal political parties. His support for Federation was crucial in Western Australia’s decision to join as an original member.

In 1901, Forrest was invited to join Prime Minister Edmund Barton‘s inaugural federal cabinet. He was a member of all but one non-Labor government over the following two decades, serving as Postmaster-General (1901), Minister for Defence (1901–1903), Minister for Home Affairs (1903–1904), and Treasurer (1905–1907, 1909–1910, 1913–1914, 1917–1918). He helped shape Australia’s early defence and financial policies, also lobbying for the construction of the Trans-Australian Railway, a pet project. Forrest served briefly as acting prime minister in 1907 and in 1913 was defeated for the leadership of the Liberal Party by a single vote. He was nominated to the peerage in 1918 by Prime Minister Billy Hughes, but died on his way to England before the appointment could be confirmed. 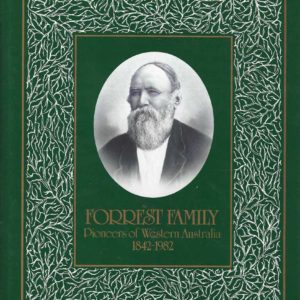