Hebrew, Israelite, Jew: The History of the Jews of Western Australia

xx, 295 p. : ill., ports. ; 24 cm. #210122
pp. 141-151, “Refugees, ” describes rising anti-Jewish prejudice in Western Australia during the Depression. After the Nazi takeover in Germany and the German aggression in Central Europe, the Western Australian Jewish community, aware of growing hostility to Jewish immigrants, failed to show a large capacity for receiving the immigrants; thus, only 185 of them settled in Western Australia up to 1939, whereas all the others left for Eastern Australia centers.
Early records indicate that approximately 1600
Jews settled in Australia between the arrival of
the First Fleet in 1788 and the gold rush of 1851.
Jews lived in WA from the early 1820s although
it was not until 1887, in Fremantle, that the first
Jewish community was formed. The Perth
Hebrew Congregation was founded in 1892 and
opened its synagogue in 1897. Synagogues
were also built in the gold rush towns of
Kalgoorlie and Coolgardie.
The major Jewish centres in Australia are in
Melbourne and Sydney, although there is a
significant Jewish population in Perth. 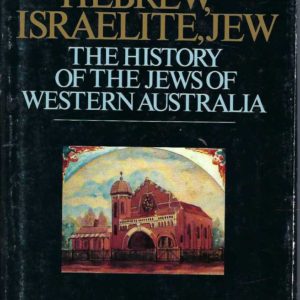 Hebrew, Israelite, Jew: The History of the Jews of Western Australia