Lady Was Not A Spy. The

Signed. Western Australia in World War II, incl Evacuation plans, Japanese submarine activities off Geraldton, submarine shelling of Port Gregory, the Brisbane Line abandonment of Western Australia in the event of invasion, the true identity of the Lady Who Was The Spy of Jurien Bay… The book is an eye-popping investigative piece concerning Japanese activities along the West coast of Australia during WW2. The lady in question was the Honourable Mrs Mary Lindsay. Signed by Author.(inscription) Prev. ownership on title. 192 p. : ill., facsims., maps, ports. ; 21 cm. #130316/0519/121121 VERY SCARCE

Following her acquisition of land at Jurien Bay around 1925 the Honourable Mary Lindsay believed the bay had the potential to be a major port and tried to convince Australian defence officials of its strategic importance.

In a letter to Colonel S F Harrison in 1932 Mary Lindsay repeated a strange story, told to her by a fisherman, about two islands off the coast of Australia which were enemy storehouses in readiness for a future war against Australia. She was told the invasion point would be Jurien Bay. The following is an excerpt from that letter.

“At a dinner party in London, over 20 years ago, I heard of Jurien Bay first from the Late Lord Kitchener, who praised it as an ideal Bay for defence purposes, and regretted Australia was not developing it. Saying, as you say, that Australia someday must be called upon to defend her land of increasing richness, & it would undoubtedly be on her West & North West Coasts, that she would be called upon to do so. He spoke of the openness of Fremantle. He mentioned the rise & fall of tide at Geraldton & and the dangerous reef four miles from that port & the frequent winds which would make it dangerous for big ships to approach the town & and its openness & then he praised Jurien Bay- which lies exactly equidistant from Fremantle & Geraldton …

… I would like to tell you of some information given me by a foreign owner of a fishing boat under two years ago, which may or may not be true, but was treated as a fairy tale when I tried to get the authorities to investigate it. This fisherman told me a certain nation planned to take Australia by surprise, & that Jurien Bay was to be their first seizure. I professed incredulity, so as to lead him on to elaborate his information. He stated that some rocks between this coast & Java were supposed to be bare rocks, but that they had been made into vast store rooms in which was stored enough to support an invading army for eight months. Further expressing incredulity that ships could get the stores even supposing they had these stores, he said it was to be done by air, & described certain indications of this for landing purposes. My daughter was here with me at the moment so I did not think it right to take the risk of going to see those rocks as she would certainly insist on coming with me, but as I would in a few months be here without her I asked him if he would let me sail in his boat to see the rocks. As I thought that for the safety of Australia this tale should be verified. I offered him a very large sum to take me and I further offered to insure his boat for the maximum sum allowable but he declared that he feared for his life and his boat, and would not go near those rocks for a fortune as the only two boats that had been there and spoken of it, were lost shortly after with all hands. When I wished to press him on later occasion he pretended he was not himself and never mentioned such things to me, and was evidently uneasy”. 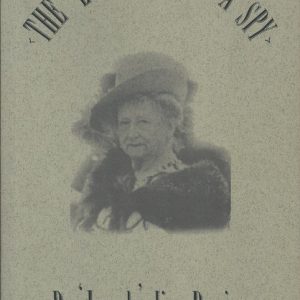 Lady Was Not A Spy. The