Home › Shop › LATEST ARRIVALS › Lesmurdie: A Home In The Hills. From The Diary Of Maude Sanderson

Lesmurdie: A Home In The Hills. From The Diary Of Maude Sanderson

To the west lies the Indian Ocan, the coastal plain, and the growing City of Perth on the mild waters of the Swan estuary, which can be seen as you climb the Darling Range by the Welshpool Road. At the top of the escarpment is a petrol station and the second turning to the left is the start of Lesmurdie Road. The jarrah forest is almost gone, although some trees remain in the fast growing suburb. Crossing a creek, then up a rise, the road sweeps down again to the creek flat. Once a ti-tree and paper-bark swamp, it is now a wide expanse of turf. Beyond this, scarcely visible behind a large copse of poplars, oaks, planes, chestnuts and other trees commonly grown in Europe, is what appears to be a very un-Australian house, for it fits neither the stereotype of the pioneer cottage nor that of the Australian suburban home. How it came to be built is told in the pages that follow, by the wife of the man who built it. Amongst the papers she left on her death in 1973 was a scrap book she had put together during her long widowhood. It tells her story of the taming and changing of the Australian bush at Lesmurdie.,for such was the name of the house. It took its name from a cold and windy grouse moor in Scotland and some steadings on a bend in the upper reaches of the river Deveron in far away Banffshire in Scotland.” pp. 112 illusts (Prev. ownership name.) #0419/0820/0521/0821 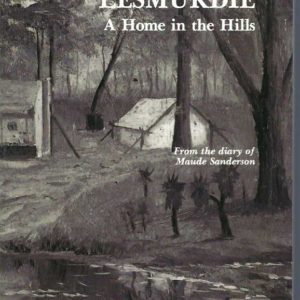 Lesmurdie: A Home In The Hills. From The Diary Of Maude Sanderson