Militant: The Life and Times of Paddy Troy

In 1926 the Troys settled at Geraldton. Paddy’s employment as a dredgehand ended with the onset of the Depression. As his father’s health declined, he assumed responsibility for his younger siblings. The experience of prolonged unemployment, punctuated by occasional relief work and casual labouring, proved formative: he broke with the Catholic Church, left the Australian Labor Party, turned to political action on behalf of the unemployed and in 1934 joined the Communist Party of Australia. In this capacity he led a strike in 1936 at the Youanmi gold-mine, where he worked as a rigger and safety officer. At St John’s Church of England, Fremantle, on 14 September 1935 he had married Mabel Grace Nielsen (d.1975).

Imprisoned for three months after the Communist Party was banned in May 1940, Troy returned to the maritime industry at the port of Fremantle and obtained a master’s certificate. In 1944 he was elected an official of the Coastal Dock, Rivers and Harbour Works Union of Workers. The union covered harbour construction workers, the crews of harbour vessels, tradesmen’s assistants and general port labourers, who were mostly employed as casual workers for meagre wages. As its secretary from 1948, Troy was a particularly effective militant who improved members’ pay and conditions. When the Court of Arbitration of Western Australia deregistered the union in 1952, and the Australian Workers’ Union poached the harbour construction workers, he set about rebuilding the Maritime Services Union and became its full-time secretary. He also helped to establish (1955) the State branch of the Federated Miscellaneous Workers’ Union. Thwarted in his efforts to amalgamate the State’s maritime unions, he helped to form the new Western Australian Trades and Labor Council in 1963.

Troy used the morning pick-up of his members to drive home the need for working-class unity. He was especially active in the peace movement and in supporting Aboriginal emancipation. While unsuccessful in his repeated candidature for State and Federal parliaments, he nevertheless commanded the trust and affection of the port workforce, and the respect of employers. Of average height, small framed, widely read, articulate and fiery, he was Western Australia’s best-known communist. He was both compassionate and demanding, and lived out his socialist principles in open-handed generosity and constant activity. 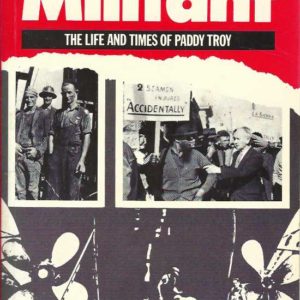 Militant: The Life and Times of Paddy Troy