MINT NEW COPY. Based on extensive archival research, this fascinating monograph rescues from obscurity the lives of over a thousand Fenians. Fenianism railed against the depopulation of a post Famine Ireland, asserting the rights of ordinary people in defiance of the British Empire, then often supported by the emergent Catholic middle class. As a tenacious conspiracy, represented in these islands by the Irish Republican Brotherhood, Fenianism propagated an independent, egalitarian republic through travelling organizers and radical newspapers, inspired by the ideals of Theobald Wolfe Tone. Soldiers of Liberty traces the secret organization throughout Ireland, Britain, North America and Australasia, highlighting the contribution of Fenian women and the often tragic lives of committed activists, while revealing the hitherto-unknown fate of ubiquitous informers enlisted by Dublin Castle.

Eva Ó Cathaoir moved from Albert-Ludwigs-Universität, Freiburg, Germany, to Ireland on winning an Irish government scholarship to continue her studies at Trinity College Dublin. A historian and promoter of Irish heritage, she specializes in nineteenth-century history and has been published widely on the Poor Law, the Famine and the Fenian movement. Her works include A Portrait of Bray (1998) and contributions to Enniscorthy: A History, edited by Colm Tóibín (2010). 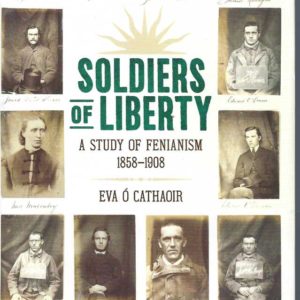