DANIEL DEFOE : Master of Fictions. His Life and Ideas

Daniel Defoe led an exciting and indeed precarious life. A provocative pamphleteer and journalist, a spy and double agent, a revolutionary and a dreamer, he was variously hunted by mobs with murderous intent and treated as a celebrity by the most powerful leaders of the country. Imprisoned many times, pilloried and reviled by his enemies, through it all he managed to produce some of the most significant literature of the eighteenth century.
Daniel Defoe: Master of Fictions is the first biography to view Defoe’s complex life through the angle of vision that is most important to us as modern readers–his career as a writer. Maximillian Novak, a leading authority on Defoe, ranges from the writer’s earliest collection of brief stories, which he presented to his future wife under the sobriquet Bellmour, to his Compleat English Gentleman, left unpublished at his death. Novak illuminates such works as Robinson Crusoe and Moll Flanders, novels that changed the course of fiction in their time and have remained towering classics to this day. And he reveals a writer who was a superb observer of his times–an age of dramatic historical, political, and social change. Indeed, through his many pamphlets, newspapers, books of travel, and works of fiction, Defoe commented on everything from birth control to the price of coal, and from flying machines to the dangers of the plague.
Beautifully and authoritatively written, this is the first serious, full-scale biography of Defoe to appear in a decade. It gives us, for the first time, a full understanding of the thought and personal experience that lie behind some of the great works of English literature. pp. 756 #0120X 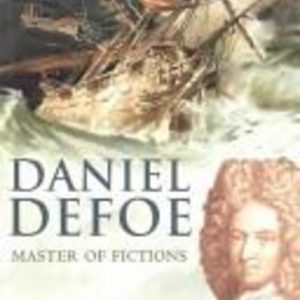 DANIEL DEFOE : Master of Fictions. His Life and Ideas